Access to Family Planning in Senegal Can Stem Infanticide, Abortion, and the Jailing of Women

Mariama, who was given a pseudonym to protect her and her family’s privacy, is a mother of six children in southern Senegal. A few years ago, Mariama, aged 40 years, gave birth to her seventh child. The infant died at birth, she said. Mariama was convicted of infanticide. She has been in jail for killing her child since 2012, including 3 years awaiting trial, and is serving a 7-year sentence. Mariama said one of the hardest things to cope with is the family she left behind. “They don’t understand what you’re going through”, she mused quietly.

This prison in Thiès, a town about an hour from Dakar, the capital, has 58 women inmates. Many of them are in jail for infanticide or abortion, which is practically banned in Senegal. Among these women are a girl aged 16 years and her grandmother, aged 83 years, who was convicted of assisting her granddaughter with infanticide, and a woman who was raped and impregnated by her employer.

Nearly 20% of women in Senegal’s prisons are jailed for infanticide, according to Association des Juristes Sénégalaises (AJS), a non-profit in Senegal that focuses on human rights. In the prison in Thiès, the figure is nearly 40%.

Jailing women has traumatic effects on families and cuts mothers off from their children. Some women inmates even raise their children up to age 3 years with them in the jail.

When asked what can help to keep women out of jail for infanticide and abortion in the first place, Kebe answered frankly: birth control. “Many women have never heard the words ‘family planning’”, she said. “When women later hear about these options, they start crying and say, ‘I wouldn’t have had to kill my baby’.”

In Senegal, only 20% of women used modern contraception in 2014, up from 10% in 2005, according to the Guttmacher Institute, a US-based reproductive health advocacy group.

In Senegal, “abortion and infanticide are mostly due to unwanted pregnancies”, said Ramatoulaye Ndao, former research monitoring and evaluation manager in Senegal with Marie Stopes International, a reproductive health NGO. “The freedom to have children by choice and not by chance is a fundamental human right, and fully promotes women’s productivity and autonomy.”

Poor and rural women have far less access to family planning. Little awareness, low literacy and education, few health clinics and health workers in remote areas, strict judges and lawmakers unfamiliar with women’s issues, and religious and cultural taboos all limit wider use of family planning in Senegal. Efforts from government and other agencies have been bridging that gap. Marie Stopes International, for example, trains health workers, runs mobile clinics, distributes contraceptives to clinics and educates people ranging from rural mothers to university students about birth control and reproductive health.

That progress was threatened when, in April, 2017, the USA cut US$69 million in funding for reproductive health services from the UNFPA, the UN Population Fund. “This decision is based on the erroneous claim that UNFPA ‘supports, or participates in the management of, a programme of coercive abortion or involuntary sterilization’ in China”, the UNFPA stated in April, 2017. The Mexico City Policy enacted in January, 2017, under the Trump administration has far-reaching effects. Marie Stopes does not offer any abortion services in Senegal, but its family planning programme there is put in jeopardy by the policy because it offers abortion services in other countries where the practice is legal. Last year, other governments and donors stepped in to cover a budget cut of nearly 20% for Marie Stopes International. But that funding runs out in mid-2018 and will leave an $80 million shortfall 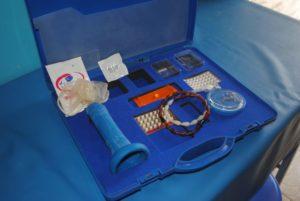 “This policy—supposedly aimed at reducing abortion—is harmful and self-defeating, seriously reducing the impact of US development assistance for family planning in some of the world’s poorest countries”, said Marjorie Newman-Williams, Marie Stopes International’s vice-president, in a press release on the anniversary of the re-imposition of the Mexico City Policy. “If we stop now, all our efforts will be lost”, said Thiaba Sembene, of Réseau Siggil Jiggen (RSJ), an NGO in Senegal that supports women’s rights.

Other groups are trying to raise awareness with judges and lawyers around special circumstances that can lead to abortions, such as rape, incest, and desperate poverty in an effort to keep women out of prison and to advocate for more lenient sentences.

The AJS is part of a national task force trying to reform abortion laws in line with the Maputo Protocol, an international pact agreed by dozens of African countries in 2005 that allows abortion in cases of sexual assault, rape, incest, and if the lives of the mother or fetus are in danger. Senegal has signed the Maputo Protocol, but abortion is still illegal except in cases where the mother’s life is in danger. Even in those extreme cases, three doctors must authorise a legal abortion. “If we allowed abortion under the conditions provided by the Maputo Protocol, perhaps the victims of rape and incest would be allowed to have legal solutions and not to resort to illegal abortion and infanticide”, said Amy Sakho, communications officer for the AJS.

The Open Society Initiative for West Africa (OSIWA) based in Dakar is also trying to raise awareness about abortion laws and educate Senegalese judges and parliamentarians about special circumstances. “Most judges are conservative and have a literal reading of the law”, said Hawa Ba, Senegal country officer for OSIWA. Long pre-trial detentions in jail also add to unfair treatment of women charged with abortion or infanticide, Ba added.

Family planning and sexual and reproductive health are sensitive, taboo issues across Senegal, especially in rural areas. Men often resist use of birth control, both for themselves and their wives. Large families are traditionally a source of pride in Senegal, where polygamy is legal. Many children can help with house and farm work.

In rural areas, women are financially dependent on husbands and cannot pay health clinic fees for consultations or contraceptives. “Men want wives to be entirely dependent on them”, said Sembene of RSJ. “If she gets contraception, he thinks she will have sex with anyone.”

“Men have a lot of power”, said Ndao of Marie Stopes. “We can’t do anything without them.”

Working with the Community

In the town of Mbour, 80 km from Dakar, Fatou Diop, aged 32 years, waits in a health clinic to get birth control pills. Her husband did not resist the idea. She is a domestic worker with three children and started using birth control in 2015, when Marie Stopes helped to expand services at this private clinic. Family planning “helped improve my life standards”, said Diop. Some of her neighbours struggle to support and educate big families with as many as 12 children. In Senegal, the average annual income was $2500 in 2016.

Diop had heard about family planning before but learned more from the clinic. A blue kit supplied by Marie Stopes shows various methods of birth control, pills, injectables, intrauterine devices, and condoms.

Women can also have reservations, said Tapa Ndlaye, owner of the clinic. Misconceptions about birth control include beliefs that it makes people infertile, will make them gain weight, or cause other negative health effects.

The clinic has held so-called open houses in recent years and hosted music, entertainment, and free education sessions about birth control and family planning. Community health workers also talk to husbands individually and repeatedly discuss with them the challenges of supporting many children on a low income, as well as health risks to mothers and children without family planning.

In the town of Rufisque, 40 km from Dakar, a narrow two-lane road is choked with trucks and buses. Because of its location near this busy “highway”, prostitution and sexually transmitted diseases are common in Rufisque, yet condoms are not. At a local health clinic, a Marie Stopes marketing agent named Coumba Ndir explained that many women living here migrate from villages with their husbands who work in nearby cement factories. There are also migrant workers from neighbouring countries such as Mali, Mauritania, and Guinea where health care and education standards are lower than in Senegal.

Average family size in this part of Rufisque is seven to 12 children, Ndir noted. “There’s no time to feed, educate, and take care of them”, she said. Large families live together with relatives or renters. Children are often left unsupervised by overburdened parents. Neglect can lead to physical and sexual abuse and incest. Ndir recalled there was a case in the community of an 8-year-old girl raped by a renter.

In a crowded consultation room in the clinic, Nulimata Ka waits for birth control pills. She has seven children. If she can’t get contraceptives, “it will be a problem”, Ka said. Or, as Ndir put it: “It would be like giving food to someone every day and then stopping and having no food at all. It’s going to be disastrous.”